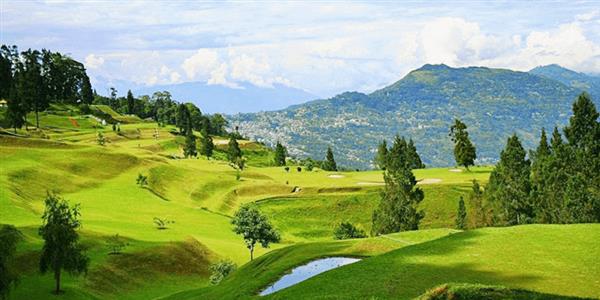 One of my trips to up north of India took me to a place called Kalimpong. About 55 kilometres from Darjeeling,  at an altitude of 1250 meters. The drive to Kalimpong from Darjeeling was breathtaking with endless landscapes full of tea gardens, which made me wonder how many people drink tea around the world. Also on the way you come across the coronation Bridge which crosses the Teesta river just at its confluence with river Rangeet. This is truly beautiful spot and don’t be surprised if some local people stop your car and ask if you would like to go rafting.  History says that Kalimpong was once a part of Sikkim and was an important centre for trade and commerce for Tibetans from the north. This picturesque town of Kalimpong is definitely a place to visit in this region.

Something very interesting that I found about Kalimpong was the different interpretations about the origin of this town’s name which according to the local Lepcha dialect literally means “the ridge where we play” because this was the spot where the tribesmen gathered to organize field sports when they were not engaged in cultivation. However, the Bhutanese contend that the name derives from their language in which it translates to “the stronghold of the King’s Minister” (“Kalim”: King’s Minister, “Pong”: stronghold). Others claim the name of this town comes from the word “Kalipong”, the name in local dialect for “Kaulim”, a fibrous plant found in abundance in this region. Still, others point out the word “Kalibong” meaning the black spar as the origin of the town’s name. Kalimpong is known for its peaceful environs, an abundance of greenery and the beautiful flowers, orchids and cacti that are found here

At Kalimpong, you can visit the monastery at Durpin Dara from where you can get a panoramic view of the town and the hills. There are also other Buddhist monasteries like the Bhutanese Thongsha Gumpha built in the 17th century. Kalimpong is also an important centre for primary and secondary education and has a number of well-reputed missionary schools and boardings.

But something that amazed me the most was a visit to Atisha Road, approximately two kilometres off Kalimpong town, perched at a height of 4000 ft. The Nursery christened the Pineview, houses the most exotic and rarest varieties of cactus from India, Africa, The Mediterranean, Jamaica, Cuba, North and South America. It has the largest collection of cacti, in the whole of Asia, it has over 1500 varieties of cactuses. I was so awestruck that I picked up 3 rare varieties of cactus and decided to grow it in my house back in Mumbai.