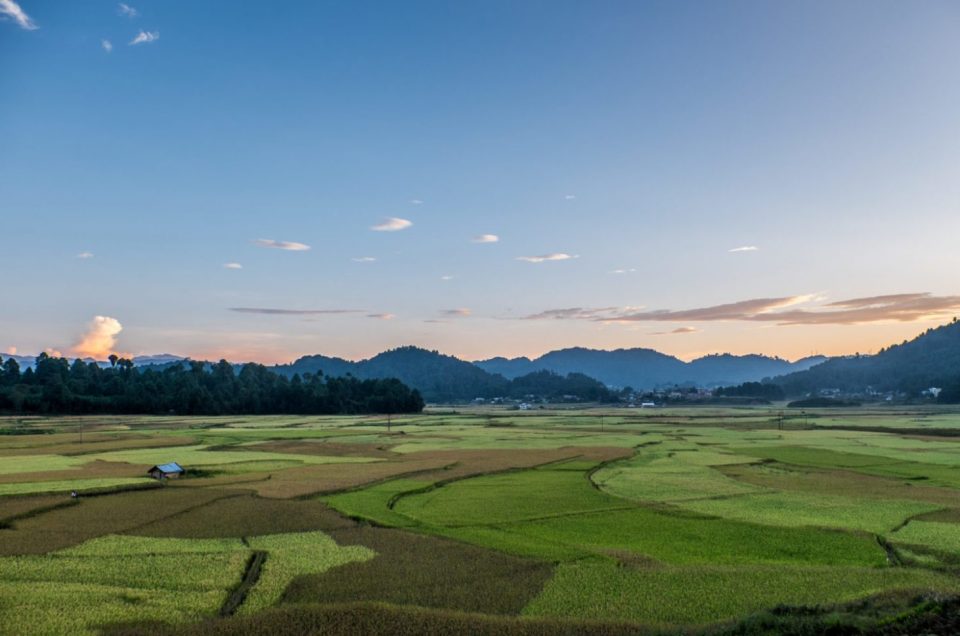 Ziro valley is easily the prettiest landscapes in all of India with its layered rice fields; pristine rivers, majestic mountains and picture-perfect village of Apatani tribe. Your trip to Arunachal Pradesh is incomplete without seeing this magnificent valley.

Ziro valley was there on my travel list for quite some time, thanks to my friends who visited there without me. And they could not stop raving about. I was planning a trip to Ziro after that for almost 3 years but it never saw the light of the day, probably the valley wanted me to offer more, that’s why Ziro Festival of Music turned out to be my reason for the visit.

The trip to Ziro began from Majuli a beautiful river island in Assam (BTW it is the largest river island in the world). We were staying in Majuli for few days, exploring the flora, fauna, tribe, and various Sataras there. It is a very peaceful and delightful island where you can bring out your inner creativity. I recommend a few days in Majuli if you are into bird watching, traditional mask, peaceful temples, rivers, fishing, weaving, understanding tribal culture and quite pleasant evenings.

According to the locals, the shortest way to reach Ziro from Majuli was to take a boat to Lakhimpur ghat, then take a local share cab or rickshaw to Lalok and from there head to Itanagar via bus. We woke up early morning, had our breakfast and took a cab to catch the first boat, which was leaving at 7:00 am. I was very excited after all I was going to Ziro, a place where I have been planning for so long. We got on to the boat easily which seemed to be a multipurpose one, accommodating cars, bikes, cycles and people. On reaching the other side of the bank we took a shared cab and a bus to reach Itanagar as recommended by the locals.

We were happy that our first part of the plan to reach Itanagar early morning was successful since the journey from Itanagar to Ziro is almost 6 hours. We had missed out on the initial two days of the festival because we fell in love with Majuli and decided to extend our stay there hence now we wanted to be in time for the Ziro festival of music, which starts early afternoon. In due course of time we realised that there was a small glitch in our planning, we did not have the Inner Line Permit (ILP).  Now ILP is a must if you want to enter Arunachal, yes even though we are Indians we all still need it and it is a very simple online process, but due to the lack of trust in government online systems or to experience the pain of traditional way I can’t remember which one exactly, we had decided to go to the check post and procure one. So as soon as we reached Itanagar we ran to the check post only to be told that they don’t issue ILP at this check post on Saturdays and Sundays. Now, this is a big issue I thought to myself but if you have travelled enough you would have learnt that there is a formal way and then there is a local way. You will find your final destination as long as you have a never-give-up attitude and are willing to do whatever it takes to make it happen. On enquiring with people around us we got multiple ideas and suggestions, but the best one came from a fruit vendor, who, by his talks seemed more like a tourist guide than a fruit vendor.

One of the ways was to apply online, which we attempted but the network was poor so couldn’t get far. We also tried calling our friend back home in Mumbai and asked him to apply online, but as we were talking and giving him instructions we lost network. Then there was the option of begging a local cop to come along with us (since we did not have an ILP) to Nahurlagon railway station in Arunachal, which is 15 Km from Itanagar check post and get ILP there or go to Kimin and try our luck.

We decided to take our chances and tried asking a cop to take us to the Naharlagun station, they laughed at us and got back to what they were doing. We stood there for approximately 5 minutes eating the banana, which we bought from the fruit vendor as a token of appreciation for his valuable advice. A while later cops raised their heads smirked at us and asked us to move from their area of vision. We were left with no option but to head to Kimin for the ILP.

First, we had to go back to Lalok from there we had to change the vehicle and reach Kimin. Here I would like to give you a tip carry a photocopy of your id proof and 2 passport size photographs. On reaching Kimin around 1 pm to our surprise we did not face any lag in procuring the ILP and the cost was only rupees 140 for two people.  The ILP issuing officer was fairly chatty and helpful. Within the short span of time between we giving him our papers and he issuing the ILP he spoke about how the weather is changing, how tourism can improve, how he is happy that we have come all the way from Mumbai to visit his beautiful state of Arunachal.

Our next task was to get transportation to Ziro. Vehicles carrying passengers to Ziro starts early in the morning while the last one leaves at 11 am. By the time we got there, it was almost 1 pm, which is why the cops at the check post were worried. They were very helpful, to an extent that they were personally trying to get us a vehicle to head to Ziro. A Sumo (preferred vehicle in mountains) with 9 tyres on the roof, packed with sardines, I mean people stopped at the check post for verifications. Our check post cop in the enthusiasm to get us to Ziro asked the driver to keep the tyres at the check post and put some people on the roof of the vehicle so that we can be accommodated. The driver had a perplexed look and asked the cop who will take responsibility in case if someone falls from the top into the valley, cops just shrugged off that point by saying locals are expert in sitting on the roof. At this point, we had to intervene and let the Sumo go-ahead without us. Our wait continued along with the process of cops asking for lifts from the odd vehicles that turned up. Since most of them were going to a short distance they couldn’t do much. Finally there was this old guy driving to Potin (its midway to Ziro ) to meet his wife in Arunachal along with some vegetables and two people, he was very happy to drop us to Potin but warned us that we might have to spend the night there, because it was difficult to get vehicles to Ziro from Potin, we decided to take our chances, so we tagged along.

The journey was filled with roads between potholes, craters, slush, mud, weak bridge (‘ Weak Bridge’ is actually mentioned before the bridge), cows, Mithun (The gayal ) beautiful rivers, splendid mountains and some old classic Hindi songs. Lack of political will to construct good roads and how corruptions have grown in Arunachal was the topic of discussion or rather the spiel by the driver.  In between, he would take out time to flirt with the old ladies who were part of construction work along the roadside. At one point the driver got out, gulped down a desi quarter, topped it up with Pepsi and started driving again. This fuel seemed to put him in good control of the roads as we prayed. As soon as we reached Potin, we thanked few Gods (out of the 33 cr.) for keeping us alive.

Now the next part of the journey was pending, we had reached only halfway. So we were waiting and waiting and waiting. By now it was almost 5.30 pm and in that region, it gets dark pretty soon, to be fair the daybreaks around 4.30 am. Well, we were contemplating our options either to find a homestay or keep waiting on the roads for some truck to come along. We were told that late in the night trucks take that route to reach Ziro. So we decided to wait for the trucks, meanwhile, we saw two Fortuners park in front of a small hotel for chai and sutta. My friend took this opportunity and asked them for a lift to Ziro and to our luck they obliged. Thus started another journey of fun, these were young guys and girls who were headed to Ziro valley for the music festival, they were very familiar with the route and the best part was they were from the valley of Ziro. When they mentioned they were Apatani tribal people my mind was totally confused, because when I hear tribal my brain forms an image of a man with no shirt, tattooed faces, some kind of sword, without shoes, etc. but to my surprise here we had people who were totally modern, shorts, Adidas shoes, Fortuner car, etc.   One of them was a cousin of the main organisers. This part of the journey was filled with beers, smokes, stand-up comedy, music, ghost stories and occasional halting in the dark just to experience the eeriness of the place.

Mind you the roads on this stretch is equally treacherous and the corruption topic did pop-up, but overall the journey was focused on fun and reaching Ziro in one piece. Finally, around 8.15 we made it to Ziro Valley, the place where I always wanted to come.

The next few days in Ziro were awesome with some amazing experiences. If you love to travel then Ziro should be on your list.