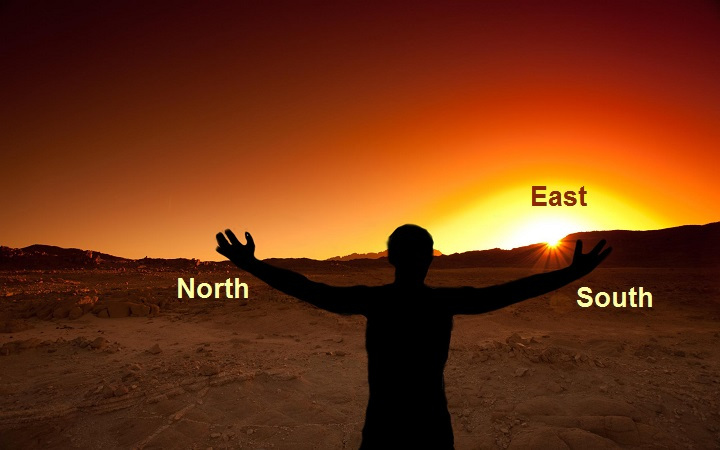 When you are travelling in the mountains, jungles or places where you have no civilisation, there are chances that you might get lost, especially if you are new to that region. Moreover, google maps on your phone won’t be working due to network issues or no battery. In such a situation finding directions can become a challenging task.
During my travel trips, I use some simple tricks to find directions when I feel that I am lost or at times when I think I am confused about it.

Here I have given some pointers, which will definitely help you find the right direction no matter what the situation. I am giving you some tips and tricks that you can use to find the directions anywhere with no technology.

If you come across a Shivling during your trip, then it is effortless to find the North direction, because in the shastras it is very clearly mentioned that the ‘Lingam’ is the face of Lord Shiva and it always faces the east and the ‘Jalhari’ has the opening (the place from where the water falls out) in the North direction. This was one of the oldest ways to identify the directions by travellers in the olden times. Once you get the north direction, you just need to draw the axis and determine the rest of the direction

2. Shadow of the stick

This is a straightforward technique which is very popular among the army. If you are in the daylight, take a stick and plant it on the ground vertically. Note the shadow and at the tip of the shadow put a rock and mark it as West. Then wait for 15 minutes and see which way the shadow is moving. After 15 minutes put another stone at the tip of the new shadow and mark it East. This will form an arc shape. The simple rule is earth rotates from West to East. From this information you would know in which direction is East and West, now you can accordingly mark North and South. Simple isn’t it.
At noon it can become challenging, but remember a thumb rule in the northern hemisphere at noon if you walk away from the sun it is north, and if you walk towards the sun, it will be the south direction. If you are in the southern hemisphere, the opposite is true.

3. Make your own compass

You can create your own compass provided you have the handy materials. Take a needle to rub it against a magnet (if you have a fridge magnet it will do) for one minute. This will magnetise the needle. Then take some water in a bowl and let it be still. Take the needle put it on the leaf and place it on top of the water in the bowl gently. Do not stir the water. The needle on the leaf will start rotating and will finally orient itself to the North-South direction. The drawback of this technique is you would know the direction of, but you will not know exactly which is North. Unless you have any other reference, you will not know the exact direction you will only know the North-South line. This technique is usually used to confirm the direction given by some unknown person. For, e.g. If you meet someone and he would say that go this way it is north, then you can use this technique to find out if it is right.

If you have a clear sky at night then finding the north star is the easiest way to know the North direction. This has been used by sailors for ages while navigating the choppy waters at night. Now let me remind you Polaris, or the North Star, is not one of the brightest stars in the night sky, it is the 48th brightest. But it is the most shining star near the Big Dipper. Imagine the Big Dipper like a ladle (hence the name), where the handle holds a cup, and the outer edge of the cup (the farthest from the handle) points out into the sky and toward North Star. For confirmation, North Star is the last star that makes up the handle of the Little Dipper. Now draw an imaginary line from the North Star to the ground, and this is the North.

Some people struggle to find the North Star at night, so there is another way to find direction. For this, you need two sticks. Take one stick approximately 2 feet long and plant it vertically on the ground. Sit on the ground and look at the tip of the stick. Now take a taller stick approximately 3 to 4 feet and place it behind the first one, sit on the ground and line up tips of both the sticks and look at a bright star in the sky. Ensure that all three are in the same straight line. Then wait for sometime, ideally 15 minutes, by this time stars would have changed their positions. The movement of the star which you were looking at will tell you the direction.

This is applicable if you are in the Northern Hemisphere.
I find this is a more comfortable option if you are not an expert at finding the North Star.
6. Snow

If you are in a region where there is ample amount of snow, observe carefully and gauge the slopes the snow forms. There will be more snow on the north facing slopes, which gets less sun, while the opposite direction will be south. You need to check multiple locations with snow to be sure of the exact south.
7. Moon

You can look at the moon to find direction at night. If the moon is in a crescent phase and if you are in the Northern Hemisphere then draw an imaginary line from top tip to the bottom and continue the line till the horizon. The point where the imagery line touches the horizon is south.

If you can find a water body in your path, go there and see if you can figure out where birds, fish or amphibians are breeding. Because often they prefer to breed on the west side so it will help you find the West which can be used to determine the other directions. However, this will not be that accurate

Spider webs are a good indication in the jungle, they generally appear on the south side of the trees.

If you are lost in the woods and have figured your directions yet you don’t know how to get out from that place due to other reasons, then you should know some basic survival skills like making fire, purifying water, building shelter, etc. which I will cover in the subsequent post. Till then practice finding your North. And do follow this blog.

Woww I loved this piece of urs.. it is very useful for someone who’s as directionally challenged as I am. Although I still think finding northstar using stick will be as tough.. Thank u 🙂