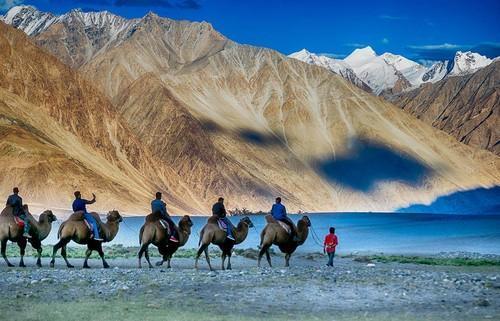 For the longest time, Ladakh was a well kept secret destination from the regular tourist. People with the right mind of a traveller searching for Offbeat locations ended up in Ladakh. But over time due to connectivity and promotion of tourism Ladakh has become a friendly place for all. For me, the funny part is that bikers who take pride to reach the highest motorable road by riding all the way, find a gujju family standing next to them eating fafda and asking them ‘Snakes joiye che.

Such has been the transition in Ladakh, in a way it is good that more people are getting to experience the beauty of India but my only worry is it should not be over commercialised. Having said that Ladakh still holds some secrets, which only the locals will tell you if you care to spend some time with them over khambir (local bread shaped like a pan) and traditional butter tea (you will love it for sure).

One such evening when I was sitting by the Pangong lake, watching the colours change as if the lake was narrating a poem to, my soul, the locals with their songs added a new dimension to it. Very soon I too joined the singing party without knowing what I was singing it was chaotic but fun. Later as the moon came up with its twinkling stars, it felt like heaven on earth. That’s when one of the local leaned towards me and said, ‘do you know the water is salty’, I said really, yes he said, and the name Pangong is a derived from the Tibetan word Banggong Co meaning “long, narrow, enchanted lake”. And the majority of the streams which fill the lake are in Tibet or rather a place controlled by China. He also said boating is not allowed on our side, but if you go to their side, you can go sailing. Hmmm that is interesting I said, and I continued gazing the beautiful sky.

This was just one little exciting fact about this region. There are some other interesting facts about Ladakh like; during the war of 1971 between India and Pakistan, Colonel Chewang Rinchen paused the war mid-day to celebrate the famous Ladakhi festival called Losar! Colonel later was awarded the Mahavira Chakra.

There is a shrine at Siachen basecamp that is called the OP baba shrine. The shrine is named after the soldier OM Prakash who single-handedly fought the attack on Malaun. The entire army respects him; it so happened that in the late 1980s,

Om Prakash, an artillery soldier was sent on a patrol on Malaun Post in Bila Complex in Northern Glacier, where he single-handedly beat back the enemy, but never returned after that. No one saw him or his body, but troops were forewarned in their dreams about impending dangers on the Glacier, after which the faith in OP Baba increased, and temples were built in his name. Reports of missions are regularly given to him before and after. The belief is that OP Baba not only protects the personnel on the Glacier from the enemy but also from the hostile nature and terrain. Troops talk about getting dreams whenever a warning is to be issued from the Baba. As respect troops give up tobacco, alcohol and non-vegetarian food during their tenure on the Glacier.

If you think nuns do Kung fu only in movies, then check out the Drukpa nunnery in Ladakh. Every day at 4 am in the Drukpa nunnery, the thin, tinny silence of Ladakh is shattered by the shrill haee-yas and huuus of the nuns practising their kung fu. Over a hundred under-25 Buddhist nuns, who live here take a break from religious studies for an intense session of hand chops, punches, shrieks and soaring high kicks. These nuns are an inspiration to a whole lot of people who see them in action.

Won’t you love to know that there is a rock in Ladakh that produces a liquid which burns fat and increases bone strength? Shilajit which means “Conqueror of Mountains and Destroyer of Weakness,” and is believed to form naturally as organic plant material naturally decomposes in the rarefied atmosphere of the sacred Himalayan mountain range. According to a millennium of Ayurvedic research in India and Tibet, Shilajit is a true Rasayan which promotes mental and physical energy, regulates blood sugar levels, stimulates the immune system, increases chi/qi/prana flow, and speeds recovery from sickness and exercise. It is regarded as one of the essential ingredients in the Ayurvedic system of medicine. Modern research has shown that Shilajit contains more than 85 minerals in ionic form as well as humic and fulvic acids. It works as a powerful anti-oxidant, and can thereby delay ageing. Traditionally Shilajit is taken with pure milk to enhance energy, sexual stamina and spiritual power.
Frankly, in all my trips I have not seen one so not sure where does it exist. However, a lot of people say that people sell it on the roads too. Maybe you can get lucky in Ladakh

Another story that makes me feel sad is that 18 men lost their lives in building the highest motorable road at Khardung La. But I must say this is one of the most difficult road construction BRO must have done. Also, the construction of Bailey Bridge on this glaciated patch is unique in the sense that its ends rest on hard ice. This bridge is between the Suru River and Dras River and stands at an altitude of 5,602 metres above sea level.

In Ladakh, Buddhists believe that the snake king Jokpo slept at the Likir Gompa. The word Likir is derived from lukhgil which means coiled snake. It is one of the richest and most influential gompas in Ladakh.

These are some of the stories that you get to hear when you are in Ladakh, but the best is yet to come. You can create your own beautiful story by having a fairytale wedding in this beautiful place. Very few have explored this option but yes it is possible, so any couple looking to get married in heaven then give me a shout. There is so much beauty to provide you with a lifetime of memories.

When is the good time to visit this and chadar trek?