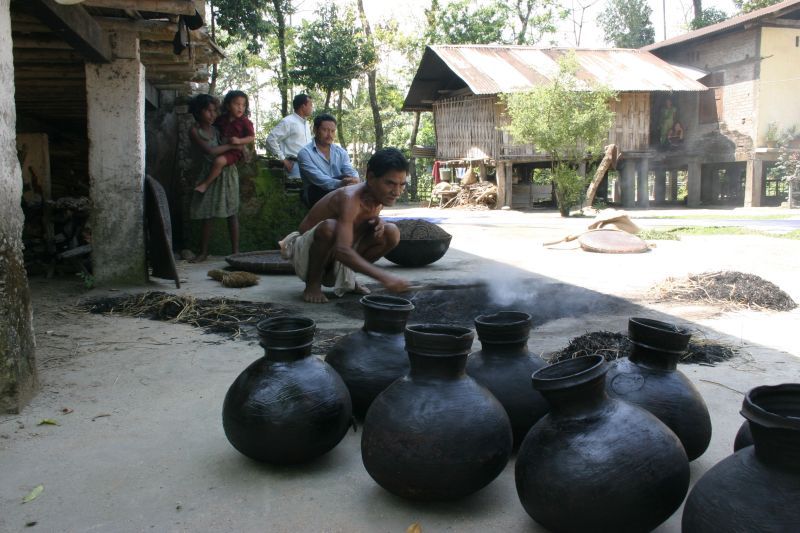 For a beer lover it is fun to hear about the growing culture of the microbrewery in India, but when you visit North East of India, it will hit you that every house is a microbrewery. They actually brew their beer in their home. Here brewery hopping would mean going from one house to the other. The ladies of the house have in-depth knowledge of brewing rice beer which is a tradition passed down for generations. For me, the highlight of the North East India trip was the different types of rice beer that I tasted. Every state makes its own version of rice beer and believe me it does taste different everywhere. I was lucky enough to taste all of them in their houses where it is made and learn a bit about how it comes together to form an excellent brew.

Chuwak from Tripura
It was a Saturday evening when I went to my friend’s house in Tripura, and as soon as I entered, I was greeted with Chuwak Bwtwk, a local rice beer that my friend’s mom had prepared at home. I was later told that it is served to a special guest or during a special occasion. I was hoping there was no special occasion on that day. The drink had a very soothing taste and unique aroma, which will definitely make you want to have more.
In Tripura you will also find the Chuwarak, it is like a whiskey, made from a variety of local ingredients like rice, pineapple, jackfruits, etc. Apparently, Tripuri whisky is among the safest in the world as there has not been a single case of death due to poisoning by consumption.

Bitchi from Meghalaya
If you travel to Meghalaya try to go to the Garo Hills just to taste Bitchi – a fermented rice beer brewed only in the Garo Hills. Besides that, there is a different charm when you are drinking the favourite drink of the locals in the hills where it is produced. The drink looks like honey mixed in water with a nice smoky and sweet flavour. The weather definitely adds to the flavour while sipping Bitchi sitting on a log watching the clouds pass by.

Zu from Mizoram
It is funny that in Mizoram alcohol was banned for a long time but people made Zu and had it. I was told that Zu, the beer is made from fermented rice, millet or maize had three different grades. And different groups of people brewed this three different type of beers. One of the days while staying over there I have had the opportunity to visit the Hnahlan village, the only village in North East where grapes are commercially grown for making wine. People over there call grape wine Zawlaidi which means ‘Love Potion.’

Lao Pani from Assam
Assam is a place for the local rice beer known as Lao Pani. During my first visit to Guwahati I wanted to try it out, but my friend who promised me to get Lao Pani forgot and since I was there for a short time, I had to wait till my next visit. When you drink Lao Pani, I suggest you spread it all around your tongue. Every part of your tongue will experience different nuances of taste like pepper, some herbs, etc. The drink is also made of jackfruit and banana. Do not buy this from any stranger.

Yu from Manipur
If nobody told you that you had Yu, you would mistake it for some fine Vodka. This is very smooth and the best way to have it is from earthen pots. The people of Manipur use Yu for medicine, relaxant and offerings to their Gods. It is prepared by fermentation of substances such as cereal grains and locally available fruits.

Zutho from Nagaland
Nagaland is another favourite state of mine. I think the name itself makes it exciting ‘Naga’, they also have the famous ‘hornbill festival’, a perfect time to visit Nagaland. The rice beer you get here is known as Zutho, and any sensible Naga will tell you that this drink has various level of potency. I never got a chance to try the various levels of potency which Zutho offered, however, I got on type which reminded me a bit of ‘Sake’.

Apong from Arunachal Pradesh
When I was in Arunachal Pradesh for the Ziro festival, I got introduced to Apong, a local beer made out of fermented rice. I suggest that you don’t try the Apong which gets served at the festival but make your way out to the local village where you will get good Apong and that too for free. They just love people visiting them. I was lucky to find a bunch of guys and girls who were chilling near a tree with some Apong. They offered me the Apong, which was different from the other Apong which I had tried earlier in the day. This one according to them was the best one because it was made from the first harvest and indeed it tasted different. Apparently, it is also a rare Apong. Guess I was lucky.