Are you a traveller or a tourist 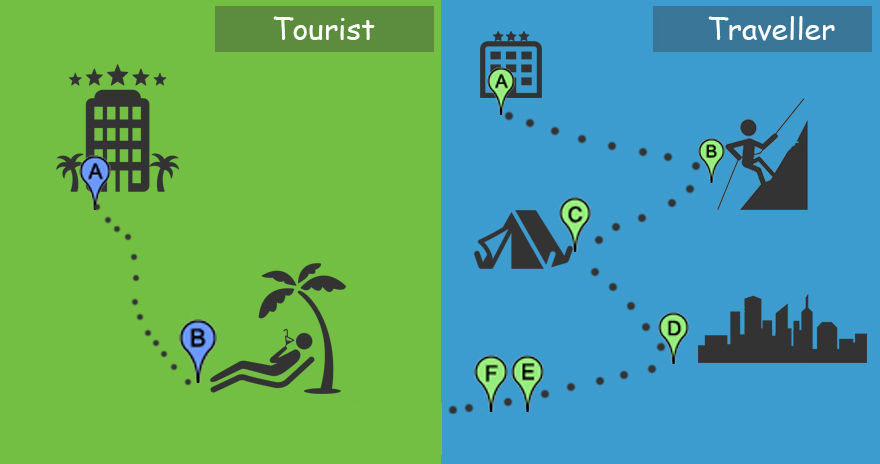 Being in the travel industry and living the passion to travel, I often get asked what is the difference between traveller and tourist. Of lately I have realised that it is very cool to say that I am a traveller, whereas most often than not we are a tourist. Just because some people take 4 vacations in a year doesn’t make them a traveller, they are probably tourist who takes more vacations. Mind you there is nothing wrong being a tourist, in fact when you have less time and more to see, it is better to be a tourist.

The main difference between a traveller and tourist is that a traveller seeks for cultural experience being one with the locals whereas a tourist looks at the cultural experience standing away from the locals. Travellers mindset is always tuned into the culture that values dissuading from the know paths. For him or her, it is all about acquiring a new perspective while retaining his or her own and being very comfortable accepting that and leave the place as a more knowledgeable person.

Unlike tourist where everything is well planned right from stay, food, etc., for a traveller, it is all about figuring it out. Whenever I travel I just book the first hotel because for VISA I need to show where I am going to stay. But after that, I go there and figure out where next to stay and do. For me, it is all about befriending other travellers and locals. Getting a drink at the neighbourhood bar where you can get the vibes of the place. Generally, when people get drunk you get very interesting stories. The trick is to sit with one glass and bide your time till the others get drunk and starts opening up freely. A traveller likes to stray away from the tourist traps and instead searches for the elusive history of the countryside and people. Some might wonder why would one does that, but then that’s what makes a traveller different.

A traveller takes the local transport, unlike a tourist who has a designated vehicle and a chauffeur to take him or her around. If there is a language barrier, he or she learns the basic language to talk in the native language. Its all about seeing and experiencing things with a refreshed viewpoint. It is not about running from one site to another and put a tick mark the list of places you saw.

Some really good travellers end up making some impact on the places they visit as well as get impacted by their travel experiences. A friend of mine from the USA was travelling for 3 years on her own with a single bag, she travelled and stayed all over Asia and eventually, she discovered her meaning of life. She saw so many disturbing things during her travel that it changed her from an obnoxious brat to a gentle and cheerful soul.

According to me travelling is more active, more inclusive and a great way to unlearn.

Let me know what does travel mean to you.

Are you a traveller or a tourist