9 travel movies that will make you fall in love 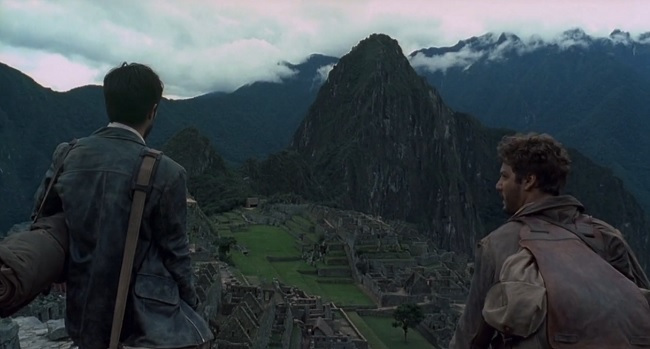 Whenever I watch a movie with some beautiful locations suddenly an urge to travel to that place is born in my mind. I am sure there are many more like me who can relate to the feeling of living or travelling to the places that are shown in the movies.

Here are some of the movies that have inspired me to travel.

Richard, a young man, travels to Thailand and finds himself in possession of an odd map. Rumours state that the map leads to an island paradise. Accompanied by a few friends, he sets out to find it.

Richard: Trust me, it’s paradise. This is where the hungry come to feed. For mine is a generation that circles the globe and searches for something we haven’t tried before. So never refuse an invitation, never resist the unfamiliar, never fail to be polite and never outstay the welcome.

I am adding this movie just because I like the concept and it inspires you to do what you want before you die. The story is about two terminally ill men left with only six months to live, decide to explore life and make a bucket list comprising all the things they have never tried before.

You know, the ancient Egyptians had a beautiful belief about death. When their souls got to the entrance to heaven, the guards asked two questions. Their answers determined whether they were able to enter or not. ‘Have you found joy in your life?’ ‘Has your life brought joy to others?’ – Carter Chambers

Christopher McCandless, a young graduate, decides to renounce all his possessions and hitchhike across America. During his journey, he encounters several situations which change him as a person.

What if I were smiling and running into your arms? Would you see then what I see now? – Christopher McCandless

Under The Tuscan Sun

This movie for sure will make you visit Itlay. Frances Mayes, a 35-year-old San Francisco writer, gets a divorce that leaves her with terminal writer’s block and depression. Later, she decides to buy a house in Tuscany in order to change her life.

They say they built the train tracks over the Alps before there was a train that could make the trip. They built it anyway. They knew one day the train would come. Any arbitrary turning along the way, and I would be elsewhere. I would be different. What are the four walls, anyway? They are what they contain. The house protects the dreamer. Unthinkably good things can happen, even late in the game. and I would be elsewhere – Frances Mayes

The Secret Life Of Walter Mitty

This movie has some incredible destinations, what I hear is the scenes of Himalaya and Afghanistan A man living a dull life dreams up romantic and action-filled scenarios in order to escape from monotony. When his own job is threatened, he sets out on a real romantic and action-packed journey.

Sometimes I don’t. If I like a moment, for me, personally, I don’t like to have the distraction of the camera. I just want to stay in it. –  Sean O’Connell

There is no way I am going to miss out on this one. I am sure most of us would have grown up watching this one. Ernesto ‘Fuser’ Guevara, a medical student, finds his calling in life when he sets out on a motorcycle road trip across South America with his friend, Alberto Granado, a biochemist. As a mark of respect, I did visit Che’s memorial when I was in Cuba.

“I finally felt myself lifted definitively away on the winds of adventure toward worlds I envisaged would be stranger than they were, into situations I imagined would be much more normal than they turned out to be.” ― Ernesto Che Guevara,

“The first commandment for every good explorer is that an expedition has two points: the point of departure and the point of arrival. If your intention is to make the second theoretical point coincide with the actual point of arrival, don’t think about the means — because the journey is a virtual space that finishes when it finishes, and there are as many means as there are different ways of ‘finishing.’ That is to say, the means are endless.” ― Ernesto Guevara,

I first saw the movie ‘Before Sunrise’ and was in love with the pace and deep meaning dialogues along with the backdrop of Europe. A beautiful trilogy and a visual delight for travellers.

“If there’s any kind of magic in this world…it must be in the attempt of understanding someone.” — Celine, Before Sunrise

Celine: “Baby, you are gonna miss that plane. Jesse: “I know.” — Before Sunset

Natalia: It’s just like our life, we appear and we disappear. We are so important to some, but we are just… passing through. – Before midnight

Let me know which movies have inspired you to travel?

9 travel movies that will make you fall in love